Today we are going to Oshkosh. We were already quite excited. Oshkosh is truly the Mecca of aviation. The dimensions are so unimaginably large that you stand in front of it in awe. It is a so-called "Fly-In", so a large part of the participants fly in with their own airplanes. There are an unbelievable number of people who fly in this week.

This week, more than 10,000 (in words "ten thousand") airplanes fly to the small airfield. I don't think there are that many planes together in all of Germany, if not all of Europe. The open spaces next to the runway are so large that everyone can park here and pitch their tent. Exactly...it's airplane camping :-)

On top of that, we add a lot of air shows at every festival. There are many booths and workshops where you can learn more. It is by far the biggest air festival in the world.

The approach is already a special challenge. Unlike in "normal times", it is really busy here. In the air it looks more like a swarm of bees than an airport. Hundreds of planes are in the air at the same time and have to be coordinated. The tower of Oshkosh is rightly called "The Worlds Busiest Control Tower".

Listen to the ATC:

The pilots are so busy that they can work max. 15 minutes. In the 30 minutes of radio, you can hear how often the controller changes. Since there is so much going on, the pilots are not supposed to talk to the controller at all. The controller controls the planes like a "swarm of bees". You keep your distance from the other planes and "hopefully" fly in the same direction. The controller addresses the planes by their shape. When he says "wing-rock" he means that the pilot should briefly "waggle" his wings to show that he has understood that he is meant.

Promptly, we then had a challenge on approach. On final approach, the runway was closed. An airplane had probably lost a part that was lying on the runway. We then had to land on "36R" instead of "27". Actually a taxiway and not a runway. What is exciting is that the planes are so closely timed that no plane is given the entire runway. There are colored markings on the runway. You have to land exactly on these and then you are immediately "guided out" of the runway. Thus, several airplanes can land "almost simultaneously" on the same runway. For us it was "Clear to land 36R on the red square".

We then got camping row 529 (there are 10-15 planes parking/camping in each row!!!) and then set up our tent. Now we are ready for the flying festival!

You can really talk about "information overflow" at Oshkosh. There are so many things happening at the same time. So many airplanes in the air and on the ground. One air show outdoing the other. You don't even know where to look first.

The sheer amount of events completely overwhelms you. I think that from the third Oshkosh on, you can slowly assess what is happening and then start to select.

On the 3 days we could see only a fraction. By the way, the pictures only partly reflect the atmosphere. Especially the sounds of the engines are missing. If then once again a jet from the time of the Cold War with indescribable roar flew low over our heads, one remains fascinated. 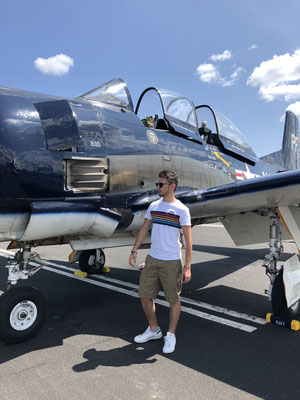 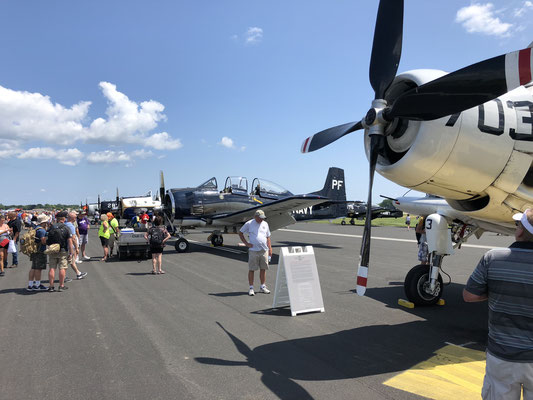 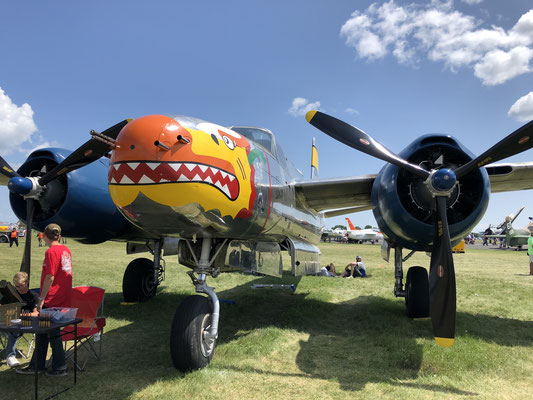 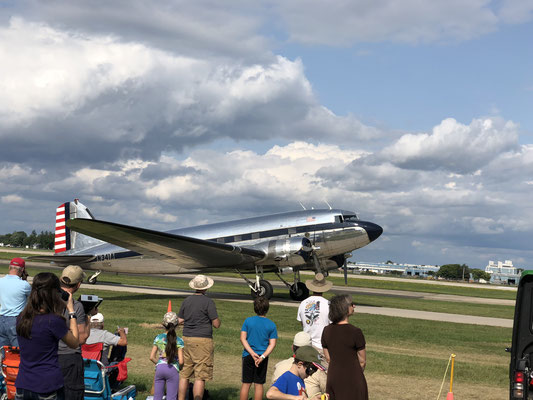 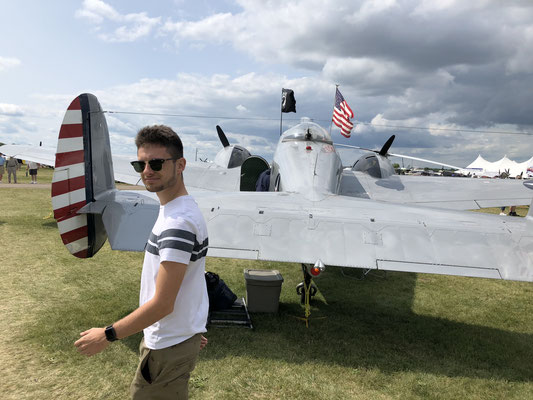 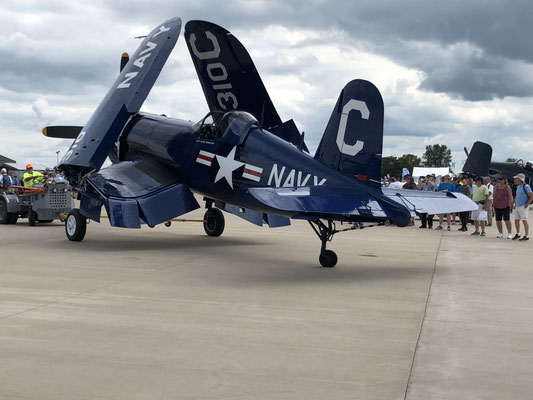 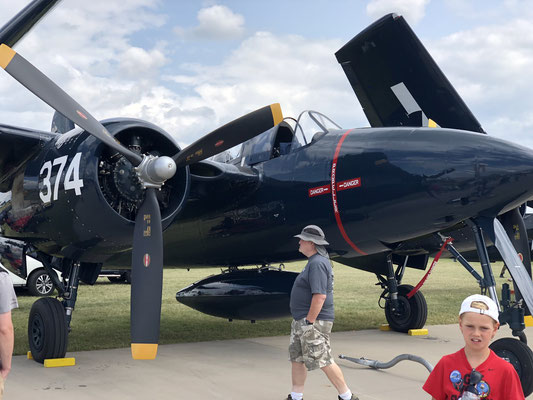 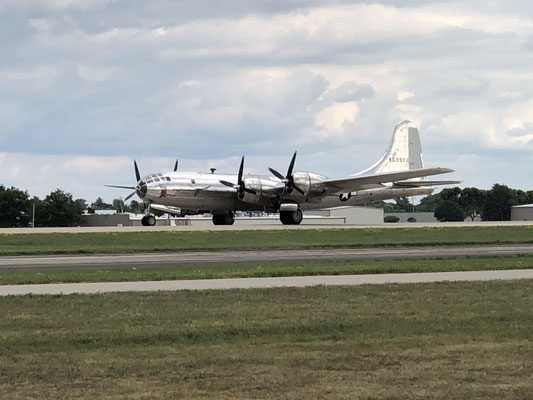 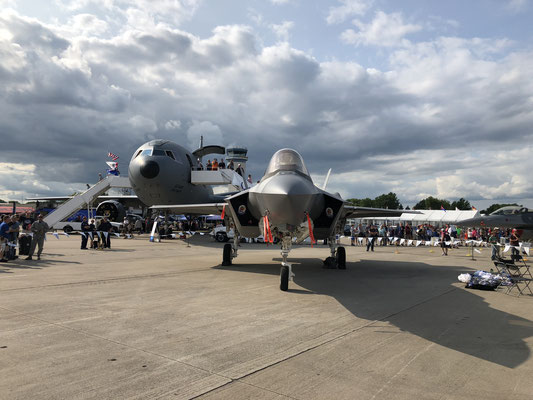 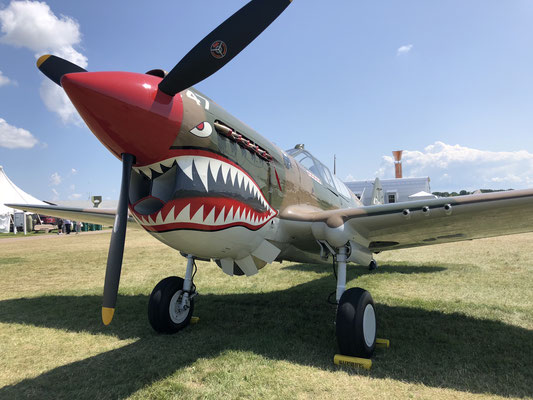 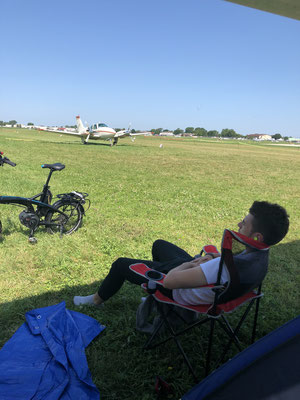 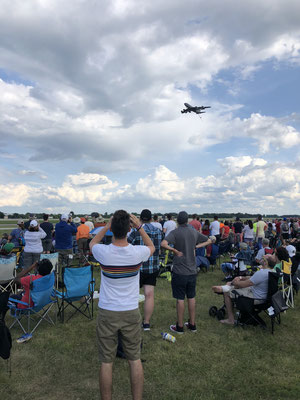 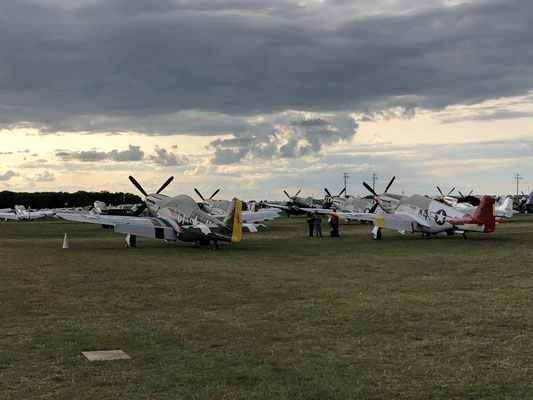 Typical activity at Oshkosh. Some GA planes taxiing...fighters taking off right next to them

We had very nice camping neighbors. Ken, the pilot invited us to his vacation home at Lake Ozarks in Missouri. At first we were not sure if it was a "typical American" invitation that we should not accept because it was said "just because". It was not. He told us where the key hangs and wished us a lot of fun in his "house at the lake" :-)

We did not know Missouri at all. We are curious!